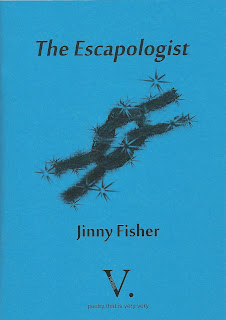 V. Press is very very delighted to launch The Escapologist, a poetry pamphlet by Jinny Fisher.


“These poems, sometimes joyful and sometimes sinister, examine human connection and disconnection. Time traveling between a subjective past and a forgiving present, Jinny Fisher is like the little boy ‘escapologist’ in the title poem: proficient in her craft, and simultaneously tethered and free.” Kathryn Maris

“As the title of this pamphlet suggests, Fisher’s poetry dazzles with its play between restraint and release, form and space. These poems resonate with love, loss, mystery and fable and just as you think ‘the ropes will slip free’, a new theme, a different landscape, a fresh voice transmutes into being.”
V. Press Guest Editor Mary-Jane Holmes

The Escapologist is very taut and very disquieting.

A sample poem from The Escapologist can be found below.

BUY The Escapologist now using the paypal link below.

As we skimmed the deeps, his freckled back was my boat. I felt the rise and fall of shoulder blades under my thumbs, his mouth swivelling into view as he gasped for breath. Look: a squinty grin, a cartwheel, a sandcastle – fortified against the tide.


Dust-coated cobwebs, thick as tea towels, draped the windows. I dangled my legs from the workbench, viced the battens while he sawed, and there were so many splinters to be gouged. Look: a table – sanded and glossed, a captain’s chair, three splay-backs.

A windowless shed at the end of the garden. Only my friend was with him. We all knew there were cameras on tripods, banks of flash-guns, umbrellas to diffuse the glare. I imagine his camouflaged murmurs as her blouse falls to the floor. Listen: Lovely – peep from under your lids. Now – a little smile.