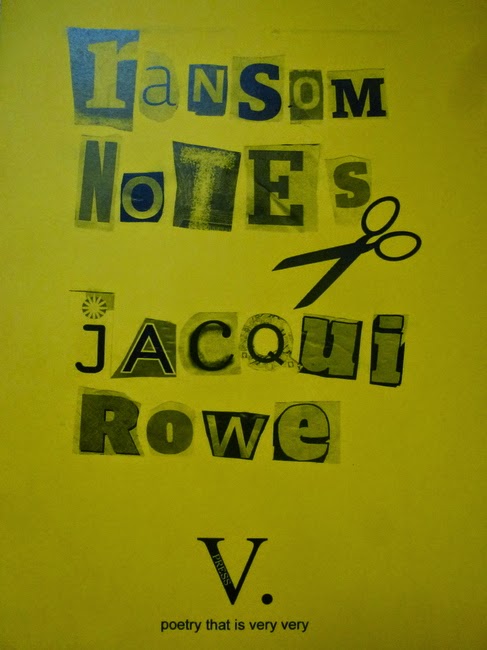 This is a sequence of little poetry fictions that are simultaneously very serendipitous and very idiosyncratic. Each poem is an abstraction from the lives of characters conceived by chance and who emerge through the writing  without ever fully explaining themselves.

One of the things that so strongly appealed to me as an editor when reading Jacqui’s manuscript was the vividness and startling freshness of the images. Also, the space the texts leave for the reader to interpret and participate, and the fact that every re-reading gives me something new – an aspect that can be hard to find and very welcome after reading a large pile of poetry manuscripts. I’d even go further and say that for me this pamphlet was not only highly re-readable but gets stronger and more addictive the more I read it.

It was great then to see these and other aspects of Ransom Notes picked out in the pamphlet’s first, and detailed, review, by Alice Tarbuck on Sabotage Reviews. She comments on how “Rowe enjoys playing with meaning, but is also aware of the potency of the non-meaningful in found poetry” and concludes: “the tantalizing lack of punctuation makes this poetry text flexible, as if what is found there might alter according to the reader’s whim. A fascinating pamphlet.” The full review may be found here.

The pamphlet can be purchased from our bookshop, with a direct link here.

I’m also very excited to say that we have another two debut solo poet pamphlets in the pipeline for this summer and autumn. More details about these to come soon, but suffice it to say that they are very, very much as exciting as Ransom Notes, but very, very different in style and subject matter – so watch this proverbial space!