Bolt Down This Earth 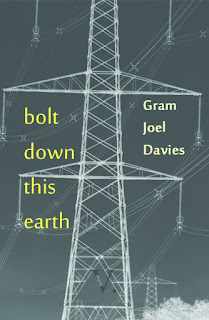 Bolt Down This Earth is Gram Joel Davies' first collection.


Bolt Down This Earth pulses with energy. These poems hang between ambition and loss; they span survival in the home and on hilltops, stretch over break-ups and break-downs. Gram Joel Davies strips back the boards of existence to look at the wires—searching for human voices where the breeze hums though cable or branch. Adolescent ritual turns to a “lightbulb crushed into light.” His imagery is electrifying. Harmony and dissonance cause unexpected meanings to crackle and spark, while scenes and relationships fuse, so that a “power station is an ice cube / across the mica flats / and cider stymies us.”

“Linguistically bold and alive to the thisness of its moments, Bolt Down This Earth is a debut collection of lyric energy and inventiveness, full-throated and confident in its own power to convince. An arrival to be celebrated.” Martin Malone

Bolt Down This Earth is very vital and very charged.


She makes him taste of tarragon,
olive oil, black pepper.
He does not rinse his beard.
He wants to wear it

"These poems are peopled by vulnerable, troubled characters, outsiders, who project a fractured and disturbing light on what we might call ‘normality’. In ‘The Buzzing Crowd’ the natural world feels as abrasive and out-of-sync as its human protagonists – ‘Those rooks, / they’d peck your brain and pull love right / from out your sockets.’

"Davies evokes psychological states of inner turmoil via language which is estranged and troubling, yet beautifully constructed in its disaffection – ‘ Your carpet crawls like droplets on a hotplate / and the fear of tiny mouthfuls grows, exponential / to fleabites’. (from ‘Creep’). Powerful stuff indeed."

From a review by Steve Spence, Litter, full review here.

"From the sublime to the electric. This superb debut collection permits Davies' original and distinctive wordsmithery full rein. Electric? Let's begin with the opening couplet (from 'How Can I Mourn a Man Still Living?'):

'At the edge of my ears, a single nerve
rings like a tungsten bulb'

I'll leave that there to ponder, but I could write an essay on that one image. And the delights keep coming. Davies is as adroit with language as he is with imagery...Like I said, Davies' poetry is electric – and I love it!"

Andy Hickmott, from a detailed review in The Journal.

Grant Tabard in The Lake:

“Bolt Down This Earth is a courteously eye-catching debut collection, a lingual leyline buzzing with a flexed perception blending a revenant reflex with lyrical confidence…
A worthy arrival. I look forward to Davies' next book.” Grant Tabard, The Lake

The full detailed and thoughtful review by Grant Tabard can be found here.

This full review may be enjoyed here.