Launching How to Parallel Park 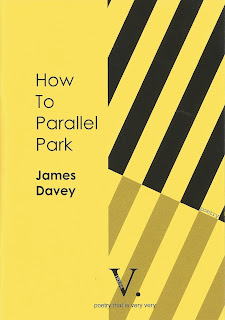 V. Press is very very delighted to launch James Davey's How to Parallel Park, our first poetry title for 2018.

V. Press is very very delighted that Jacqui Rowe will be reading from her collection Blink at Ledbury Poetry Salon in June.

Jacqui will also be discussing her poems at the Ledbury Poetry Festival salon event on Tuesday, June 5.

Information from Ledbury Poetry Festival about the next four salon events can be found below, followed by a paypal link for ordering Blink.

Ledbury Poetry Salons, 7pm – 9pm, The Master’s House Panelled Room, £5 For the first half of the evening a Featured Poet will read and discuss their poems. This is followed by an Open Mic. Come along and expand your enjoyment of poetry through readings and conversation!

Tuesday 6 February with featured poet Adam Horovitz
Join us to hear poems from The Soil Never Sleeps, a new poetry collection from Adam Horovitz. As poet in residence for the Pasture-fed Livestock Association, Adam was commissioned to visit four of their farms across England and Wales and write about them. He reflects passionately on his love of Britain’s landscape and especially its farms.

Tuesday 6 March with featured poet Roz Goddard
Roz Goddard will read from a new pamphlet Spill published by Flarestack Press. Previously she published The Sopranos Sonnets and Other Poems with Nine Arches Press. Roz Goddard has worked for many years as a poet of the Festival’s Poets in Schools programme and is also a project manager for is also project manager for the ACE funded West Midlands Readers Network.

Tuesday 8 May with featured poet Roy McFarlane
Roy McFarlane was born in Birmingham of Jamaican parentage and spent most of his years living in Wolverhampton. He has held the role of Birmingham’s Poet Laureate, Starbucks and Shakespeare Birthplace Trust Poet in Residence. Roy was highly commended by the Forward Prize for ‘Papers’, published in the Forward Book of Poetry 2017. Other anthologies, including Out of Bounds (Bloodaxe 2012) and he is the writer and editor of Celebrate Wha? Ten Black British Poets from the Midlands (Smokestack 2011). His first full collection of poems, Beginning With Your Last Breath, was published by Nine Arches Press (2016).

Tuesday 5 June with featured poet Jacqui Rowe
Jacqui Rowe has had four poetry pamphlets published and her poems have appeared widely in magazines, such as Tears in the Fence, Bare Fiction, The Interpreter’s House, and Poetry Review. She has also read her own poems on Radio 4’s Poetry Please. hosted by Roger McGough. Her first full collection, Blink, is published by V Press. Co-founder and co-editor of the award-winning independent press, Flarestack Poets, she is a sought after mentor for other poets and a tutor for the Poetry School.

V. Press is very very pleased to simultaneously finish 2017 and start 2018 with news of even more reviews!

Following on from December's top title listings from The Poetry School, Jacqui Rowe's Blink and Stephen Daniels' Tell Mistakes I Love Them both featured on David Clarke's end-of-year listings at A Thing for Poetry.

"Blink showcases Jacqui's range, both emotionally and culturally, from occasional poems and ekphrasis to responses to Apollinaire and Verlaine; all held together by a characteristic clear-sightedness. Drawing as it does from Jacqui's previous publications, her first 'proper' collection is arguably a 'New and Selected', but it still feels remarkably cohesive."
David Clarke, A Thing for Poetry

"Stephen's carefully conveyed sense of the surreal qualities of the everyday allows him to address the big themes from surprising angles, for instance in one poem where intimations of mortality lurk in the background as he describes getting a mole checked by his doctor. He's one of those poets who writes poems about things that other poets wouldn't write poems about, which is only ever a good thing."
David Clarke, A Thing for Poetry

David's full article and listings can be enjoyed here.

New Year's Day also saw the publication of a new review of Tell Mistakes I Love Them over at Sabotage Reviews.


BUY a copy of Blink now using the paypal link below:


BUY a copy of Tell Mistake I Love Them now using the paypal link below: