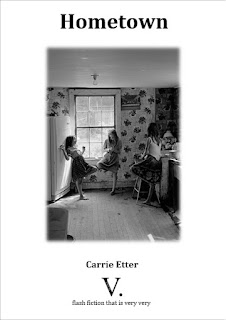 Hometown is a pamphlet of short fictions by Carrie Etter, published in April 2016, and V. Press's first flash fiction title.

Hometown brims with emotion-charged stories, distinctive characters and situations of hidden and not-so-hidden tensions in everyday lives in the American Midwest. From characters’ differing sense of responsibility to themselves, their friends and their families, to the wide-ranging aftermath of a white man’s accidental killing of a black man in central Illinois, these flash fictions illuminate the daily struggle of being human. Hometown proves very immediate and very engaging from start to finish.

"Etter's stories climb into your head and reboot it from the inside, from the squealingly joyous to the darkly sad, some with gear changes that fling you backwards in your seat, some told in voices so strong you could lean against them, and then some fragile, as if the page held nothing but the faint impression of a delicate and long-dead insect. I can't wait for more." David Gaffney

Buy a copy of Hometown now:

A sample story from Hometown can be read below.

Eddie’s First Seven Visits to Nick in Prison as Questionnaire

Question 1: What do you miss most?

Week 1: Pot. Sex. But then I wasn’t getting much sex anyway with me and Lisa separated, was I?

Week 5: You’re trying to get me to say Micheleo’s pizza, aren’t you? How many times do you think we met there for lunch? It has to be in the hundreds. We get pizza here — not very good pizza, of course, but it passes. My mom’s chuck roast, now that I could kill for. I’m joking, come on!

Week 7: Crystal. The way she smells after a bath. How cute she looks when she rubs her nose in her sleep.

Week 9: Have you found a way to sneak beer in here? ‘Cause if you have, I could be real popular. At least for a day.

Week 11: The sky. The prairie. Big open space. Could you blow up a photograph of the view from my folks’ house out the back, that overgrown field? I swear some of the cars we used to play with are still in there somewhere. You could do it, right? I could put it on my wall.

Week 13: What do you want me to say? I miss everything, fucking everything. Waking up with Lisa. Hearing Crystal in the next room. Mom, Dad — even you.

Question 2: How are things with Lisa?

Week 1: Okay, I guess. She showed up for everything, but we haven’t really talked. We’re good. I hope we’re good.

Week 3: She didn’t come this week. She said she had to work last minute, somebody got sick. I believe her, but I still think I ain’t lookin’ so hot to her these days, you know what I mean? Three years with good behavior. When was I ever good for three months, let alone three years? But then it’s easier to be good in here, a little bit.

Week 11: This time when she came I combed my hair. Don’t laugh. You know it’s not me. Or wasn’t me. I was just trying to clean up, look good for her, and what can I do in bright orange clothes? I can shave, and I can comb my hair. I can brush my teeth. I did all that. I don’t know if she noticed.

Week 13: Will you tell me what to do? Is there anything I can do?

Question 3: What are you going to do when you get out?

Week 1: Get drunk, I guess. Get high. Sleep it off and start over again.

Week 3: Drive! Music up, window down. You’re in the passenger seat.

Week 5: It depends on what’s up with Lisa.

Week 7: What do you want me to say? Start over? What do I know how to do besides drive a cab? You’re the smart one.

Week 9: Join the library? Hell if I know.

“In Hometown Etter creates engaging vignettes of, yes, ‘normal’ life. Even the aftermath of an accidental death is notable for its banality: the killer’s wife visits him in prison, eats homemade sandwiches and drinks Diet Coke; the killer himself brushes his teeth, lifts weights and prays his wife won’t divorce him; their daughter watches Sesame Street and sings along. What’s moving is that this normality in the face of horrific circumstances feels so real, so plausible, and reminds us that a nightmarish twist of fate could be around the corner for any of us…

“This is the first fiction venture by V Press and it’s encouraging to see new small presses championing experimental and innovative forms of writing. Etter’s voice is honest and irreverent and shows that ‘normal’ life can be very strange indeed.”

From a review by Vicky MacKenzie in New Welsh Reader, Issue 111.

"...there is only one action to take with Hometown: read it, devour it, and savour these stories in your mind, but be prepared for them to linger for a long time afterwards."

Santino Prinzi concludes in his review on Bath Flash Fiction Award. The full review, which includes thoughtful commentary on a number of Etter's individual flashes within the pamphlet, can be enjoyed here.

"... Hometown's stories are the real thing, the work of a skilled wordsmith and witness."