Life may or may not be like a box of chocolates, but V. Press is very very pleased to offer readers this mini-selection of love poems/flashes from some of our titles in the run up to Valentine's Day 2019.

The themed prose and poems here are a small sample of what's on offer in the bookshop. And please do click on the link for each title  below to enjoy more work by the same writer, along with information and reviews about the book or pamphlet.

Obviously, we love V. Press titles - we also think they're the perfect gift not just for reading and loving, but sharing too! For Valentine's Day and the rest of the year!

We are made from beautiful atoms

Remember, my brother,
we both were born and wiped unclean;
that blood of birth could connect us –
our mothers are portals to beautiful atoms.
Hold on to me, brother, I shall carry you.
Remember our world was once a beautiful eye

but
none of us
saw it.

Antony Owen, from The Nagsaki Elder 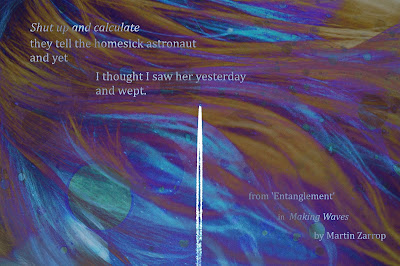 A phantom haunts the universe,
a quantum thread that binds our lives
to distant mass, refusing to let go.

Astronomers hold to another truth:
as bodies move apart, attraction fades
and memory weighs nothing out in space.

Shut up and calculate
they tell the homesick astronaut
and yet

I thought I saw her yesterday
and wept.

Now and then, Faith likes to switch on her smoke alarm in the middle of the night to wake Denholm. Summoning him next-door to read the electricity or kill her spiders just hasn’t got his attention. She always gets going at about four a.m., because she wants to give Denholm one restful sleep cycle, timing her disruption such as to disarrange him no more than necessary. She leaves her windows closed and switches on the fan oven, dishwasher and tumble dryer simultaneously, since she has discovered that the combined increase in temperature is enough to trigger her temperamental heat-sensitive kitchen alarm, a method that she considers altogether more stylish than resorting to burnt toast. And, once this little monster has begun its relentless middle-of-the-night ear-pain, she leaves it screeching, ignoring the dismay of her only cat, Rupert, until the connecting alarms in the hallway and bedroom are also kicking off. The triple effect of these in the pitch of night is usually enough to rouse her dutiful neighbour. If he is sleeping quite soundly, she nudges him further by clattering chairs and slamming the stick of her broom against the adjoining wall, in a pretence of dealing with the blare. When she’s heard his first tentative step down that creaking staircase, she removes all but a trace of make-up as if caught off-guard; tangles her braid bun into a just-out-of-someone-else’s-bed look; then puts on her lilac slip, which she is certain is his favourite. She does this even though she is a happy widow now and Denholm is fifteen years her senior. She does this even though he struggles down those stairs at nights to get to her with his gammy leg. She does this because she can’t resist her need for these performances: when his fingers press her buzzer and she swings the door open, she’s always beguiled by that look on her own face.

Michael Loveday, from Three Men on the Edge

There was a time for volcanoes,
when lava burned through veins
and sparks spat from my eyes.

But now, I am ready for the sofa of him,
for the thousandth run on his TV
of Toy Story or Love, Actually;
for the sleep that I slip into
as easily as his cats;
for his cats, his cushions, his biscuits;
for his non-explosive central heating.

He should think himself lucky.
Volcanoes are much easier to live with

Brenda-Read Brown, from Like love
Posted by V. Press at 00:00