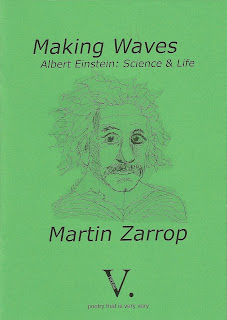 Making Waves Albert Einstein: Science & Life portrays the life and times of a genius with poems that are very passionate and very human.

“Don't be put off by the Physics! This poetic study of Einstein's life and work is deeply informed but also witty, varied and often moving. ‘Don't feel sorry for me. / There must be certainty in the world’ Einstein says here, but as he faces the travails of certainty Martin Zarrop ensures that we do.” Jeffrey Wainwright

“Martin Zarrop's latest pamphlet Making Waves takes a look at the life and times of Albert Einstein and the lives of those he has influenced and touches. The poems here skilfully encapsulate different aspects of Einstein's life, from his work and theories and their aftermath to touching poems about his private life, the woman he married and the child he lost. The writing finds Zarrop on top form, witty and wry, and with a keen eye for details, able to paint an overall picture while still having time to see ‘somewhere between here / and the nearest star: / a single hair - / now found’. Enjoy this wonderful collection of poems.” David Tait

A sample poem from the pamphlet can be found below.


N.B. Any international customs/duty charges are the buyer's responsibility.

When I looked in the mirror, I saw him,
that warm smile below a halo of hair,
the intensity in his brown eyes.
It’s you, I said
but he shook his head with a No,
not me, I’d rather be YOU,
in that strong German accent
I remember from old newsreels.

After that, I became well-known
as an after-dinner speaker
on relativity and gravitation,
reality and the quantum,
philosophy and politics
and how to act disgracefully
with any number of women
who hero-worshipped me.

So much affection, so little time
to decipher the thoughts of God.
In the end they checked my birth certificate,
charged me with Impersonating A Physicist.
The scientists of the world were appalled;
they always claimed I was a mathematician
or, even worse, a kind of philosopher.


“[…]Zarrop imparts his knowledge with a lightness of touch, with an ear for the anecdote and keen sense for picking propitious moments in time.[…]
The science really comes to life where the poet-narrator-teacher employs metaphoric image or storytelling to great effect, as in ‘Equivalence.’ The image is of a man in a lift with the cable severed. Is he an astronaut, floating, or is he falling, in that precise moment? ‘as reaction/follows action,/performs a slow rotation/before terrestrial matter,/without a single thought,/gets in the way.’ The verbal shift from the scientific to the colloquial finale of ‘gets in the way,’ illustrates best the poet’s ability to bridge these two worlds in a way that is fascinating, and illuminates for once, (to me, at least, as one all too decidedly ‘non-scientific’), the poetry of, and in, equations, equivalencies and scientific paradox.”

"[..] And that is what I suppose struck me most — how human he [Einstein] was — this man who has always seemed to me larger than real life, distanced by his genius.

"There’s humour here, too. [...] After reading these poems, I think of the great man differently. He has stepped down from his stone pedestal. He has turned into a human being."