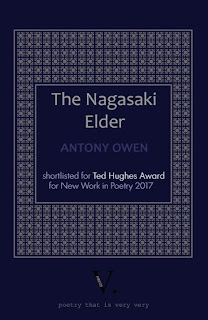 "Antony Owen closely examines the human toll and the indiscriminate effects of chemical warfare in this new and affecting collection.  Owen’s exploration is both tender and melancholic, and his imagery of flesh transmuted is as beautiful as it is horrific.  This book sings and weeps of loss; it is a testimony to the survivors and the wounds that they carry; to the dead and the shadows they leave on the earth.” Helen Ivory

“Antony Owen is the bravest British poet of his generation. He goes to places poetry doesn't visit and lingering there, crafts acts of testimony and tribute. He does what art is supposed to; raising us the highest so that we can see the deepest. The Nagasaki Elder in its stunning evocation of human suffering is simply his best work yet.” Joe Horgan

“The Nagasaki Elder is a beautiful and harrowing account of a journey through the bombed cities of Japan.  Unlike most poets who hold forth about atrocities, Antony Owen has been there.  He has spoken in depth to the Hibakusha and transformed their voices into some extraordinary poems.  And we must listen, if we don't want our world to end as theirs did.” Merryn Williams

The Nagasaki Elder is very very hard-hitting yet very tender.


A sample poem from the collection may be enjoyed below.

BUY The Nagasaki Elder now, using the paypal link below.


To feed a Nagasaki starling

She said don’t go to the shadows without water –
I have tried to erase him for sixty-four years
and my wrists are tired;
I have scrubbed the darkness of my son
so he could be buried at last in sunlight.

Don’t go to my son without removing your shoes –
I have tried to bathe him with prayers and carbolic
but he only gets blacker;
I have lived for ninety-nine years
and starlings are beginning to land by my feet.

Don’t wind the paralysed clock,
it is rebuilding the world with seared hands –
I have tried to turn back time
but God will not allow it in Nagasaki;
I had tried to make another child but gave birth to pink curd.

Don’t tell them my name,
and look me in the face when you see him –
I have tried to understand
why ink is only spilled by vaporised kin;
I have tried to write a haiku
for the willow which strokes my son.

Don’t disturb my son
when the raven plays in the shape of his spectre –
I have tried to shoo it away and it quarrels with my broomstick;
I have tried to tell my son that he was ten yards from living.

I have tried to feed a Nagasaki starling
when it drank the black rain;
I have tried to get it to sing so this wraith could be comforted –
don’t disturb my grave and desecrate me

From the judges: “shocking to read, but at the same time strangely beautiful and gentle... relevant to our times, hardhitting, and brilliantly written”.

“The Nagasaki Elder (V. Press, £9.99) is Owen’s fifth collection of poems, and his best yet. The book has the inspired ferocity and prophetic fury of those British poets like Edith Sitwell, Randall Swingler, EP Thompson, James Kirkup and Adrian Mitchell who have protested so eloquently against nuclear weapons. There are some fine individual poems here, notably ‘How to survive a nuclear winter’, ‘To feed a Nagasaki starling’ and ‘The stars that wandered Hiroshima’. One of the most memorable is ‘The art of war’”
Andy Croft, Morning Star (Full review here.)

"The poetry in this book is stark and vivid. Owen does not mess about, casting solid images, the burnt shadows of the victims, and more pertinently the survivors who bear witness to these awful events. Antony applies presence and absence, the point of impact contrasted with the eerie stillness that follows flattened earth and muted lives. I particularly enjoyed the Senryu poems, that apply a haiku-like form to leave powerful and indelible images that haunt you long after the poem has been read and absorbed."
Adam Steiner, Hong Kong Review of Books (Full review here.)

"As the world watches today in apprehension and disbelief as test missiles from North Korea pass over Japan, his motives must be applauded. Owen has taken care to distil his anger and pity. His poetry is not in-your-face protest, but crafted, lyrical, and resonant."
Greg Freeman, WriteOutLoud (Full review here.)

"Antony Owen’s fifth collection, The Nagasaki Elder (V Press), is one of those compelling slim volumes that reminds you what poetry can do when it confronts the big themes of our times – or any times. Those themes don’t get any bigger than war, and its obscene effects on civilians sacrificed on the altar of geopolitical manoeuvres. What marks out Owen’s work as exceptional is the illuminating perspectives he brings to a subject that is already so well travelled...

"He writes universally, but with an insider’s eye. In doing so, he has written a collection that bridges past and present, and could not be more timely."

Neil Young, The Poets' Republic, Autumn 2017 (The issue containing the full review may be bought here.)

"Antony Owen has divided the collection into two named sections, 'Inferno' and 'The Human Blitz'. Owen deals with the devestation wreaked on Hiroshima in the first part, while focusing on closer to home in the form of the Coventry blitz during World War II, alongside placed such as Basra and Chernobyl.

"...The second section of the book, though shorter is no less powerful...

"This is a brave and bold publication by V. Press... Antony Owen is to be commended for tackling such harrowing subject matter..."

From a considered and detailed review (including a close-up look at two of the poems) by Andrew Taylor in The Journal.