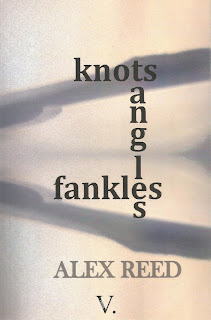 “Re-imagining the research of Laing and Esterson, Alex Reed’s multi-vocal knots, tangles, fankles asks important questions about sanity, madness and the family in a time before the digital became part of the story. This story revolves around Hazel, a young working class girl with the odds stacked against her, and it is both everyday and appalling. A shifting constellation of voices, overheard from behind closed doors, animates an insightful and sensitive collection of poems to think, learn and feel with. Carefully choreographed, all the protagonists earn our sympathy. They hold up a mirror to the human predicament – in black and white, compelling and filmic, concealing as much as they reveal, getting under your skin and staying with you long after reading the last page.” Linda France

“Alex Reed’s debut poetry collection knots, tangles, fankles tells the powerful, heart-breaking story of Hazel, sixteen years old and diagnosed as schizophrenic. Demonstrating a deft, versatile, and compassionate hand, Reed unveils Hazel’s true plight, not only through the surreal imagery of her thoughts, but also through the voices of those both hindering and healing her: from alarmed and hyper-protective parents, to institutionalised hospital staff, to the grounding, reassuring, real-life Dr Aaron Esterson, who along with R. D. Laing sought to uncover the source of mental illness in families using unconventional theories and methods. Though this is Hazel’s journey, each of Reed’s characters is undergoing their own personal struggle and anguish. In a setting similar to Ken Kesey’s One Flew over the Cuckoo’s Nest and based on true cases, Esterson enables Hazel ‘but for the first time to hear [her] own voice’. It speaks to Reed’s ability as a poet that such a moment is so keenly felt and quietly celebrated by the reader, especially in the light of what follows.” Charles G Lauder Jr

this is a story about the woodentops
mummy & daddy woodentop

mummy woodentop said to daddy woodentop
the girl’s not right, we’ll have her mended

let’s call for the woodentop doctor
he’ll saw her head open, hack out the rot

but dr esterson didn’t have a saw
never did much, just sat in his room

did you ever wish to be real
not made of wood?

Also available from V. Press: These nights at home by Alex Reed, with photos by Keren Banning.