These nights at home 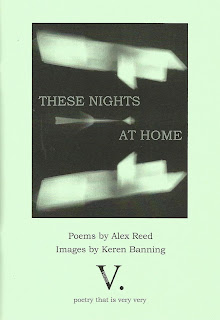 These nights at home, which follows on from Alex Reed’s earlier V. Press pamphlet A Career in Accompaniment, is very personal, and yet very familiar. This longer pamphlet voices the loneliness and isolation that follow bereavement, and the predicament of trying to begin anew. Moments of tenderness, flashback, longing and love flicker through the mind and heart as the months pass. The poems are accompanied by Keren Banning’s striking series of photographic images that are simultaneously abstract and intimate, drawing the reader further into this fragmented landscape.


“The most striking feature of Alex Reed’s poems in These nights at home is their clarity – a transparency that allows the reader in to the emotions and experience they explore. This lucid quality allows complex and deep feelings to be expressed vividly. Being able to approach the most difficult human experience so directly and honestly makes the poems moving and compelling. Specific concrete details convey loss and grief, loneliness, the pull of memory. Recurring motifs – empty rooms, hallways, doors – suggest the slow and repetitive process of grieving. There is nothing spare in the poems. Every word earns its place. The voice is quiet, restrained, attentive. The poems are not sombre. There are flashes of humour and a range of tone is created through the different poetic forms – prose poems building unsettling extended metaphors, experimental layouts suggesting a shifting sense of memory and perception. The pamphlet shows the reader what it means to be living with loss, conveying the process of grief with its ‘pacing hours’, and just a hint of a tentative way forward. It reminds us how, in the right hands, the economy of poetry can communicate the most complex of emotions.” Cynthia Fuller

“Less fraught than A Career in Accompaniment, more a slow immersive haunting, the poems in These nights at home enter a different unknown – the oceanic space of loss and absence.  Tentative minimalism provides the key to open up distances, far and near.  Here, less is more – reflective territory exquisitely distilled in Keren Banning’s spectral photographs.” Linda France

A sample poem and a sample image from this longer pamphlet can be found below.

BUY These nights at home now using the paypal link below.

friends say it’s early yet
your picture on the fireplace, smiling

it takes a year
your reading specs on the table

it takes two years
folded clothes still on the shelves

it takes four years
faint trace of you from the wool

there is a river that runs within –
vast, uncharted, rising 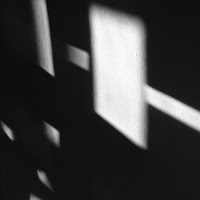 A poetryfilm of one of the poems set to music can also be enjoyed below.

“This collection is a powerful account of a life changing bereavement. It moved me deeply, resonating with my personal experience.
“[..] Using white space, sparse lines, couplets, lists, prose and short sequences and a meditative pace, Reed infuses his writing with a persistent sense of loneliness, a wash of grief and a quest for the parted. [...]
“The pamphlet successfully expresses this most personal challenge. The world keeps spinning and yet, for the narrator, it brims with the beloved’s existence in dreams, in hauntings, repeat sightings, in voids and lonely spaces, reminiscent of a Hopper painting.”

"“These nights at home” is a series of seventeen poems interspersed with images by Keren Banning. The photographic images are abstract, lit, white textures on black with blurred, uncertain outlines. Since many of the poems are anchored in bereavement, the images are complementary...

"A damp towel isn’t for a shared bed and the sense of having no one to phone, or the person you want to phone not being available, is grief. Throughout “These nights at home” recurring images of a doors, shelves and empty rooms are reminders of bereavement. The collection is sensitively written and Keren Banning’s images reflect Alex Reed’s themes."

Emma Lee, full review with quotes from the poems here