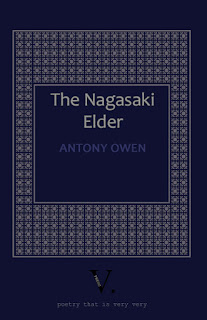 "Antony Owen closely examines the human toll and the indiscriminate effects of chemical warfare in this new and affecting collection.  Owen’s exploration is both tender and melancholic, and his imagery of flesh transmuted is as beautiful as it is horrific.  This book sings and weeps of loss; it is a testimony to the survivors and the wounds that they carry; to the dead and the shadows they leave on the earth.” Helen Ivory

“Antony Owen is the bravest British poet of his generation. He goes to places poetry doesn't visit and lingering there, crafts acts of testimony and tribute. He does what art is supposed to; raising us the highest so that we can see the deepest. The Nagasaki Elder in its stunning evocation of human suffering is simply his best work yet.” Joe Horgan

“The Nagasaki Elder is a beautiful and harrowing account of a journey through the bombed cities of Japan.  Unlike most poets who hold forth about atrocities, Antony Owen has been there.  He has spoken in depth to the Hibakusha and transformed their voices into some extraordinary poems.  And we must listen, if we don't want our world to end as theirs did.” Merryn Williams

The Nagasaki Elder is very very hard-hitting yet very tender.


Launch details and a sample poem from the collection may be enjoyed below.


Buy The Nagasaki Elder now, using the paypal link below.

To feed a Nagasaki starling

She said don’t go to the shadows without water –
I have tried to erase him for sixty-four years
and my wrists are tired;
I have scrubbed the darkness of my son
so he could be buried at last in sunlight.

Don’t go to my son without removing your shoes –
I have tried to bathe him with prayers and carbolic
but he only gets blacker;
I have lived for ninety-nine years
and starlings are beginning to land by my feet.

Don’t wind the paralysed clock,
it is rebuilding the world with seared hands –
I have tried to turn back time
but God will not allow it in Nagasaki;
I had tried to make another child but gave birth to pink curd.

Don’t tell them my name,
and look me in the face when you see him –
I have tried to understand
why ink is only spilled by vaporised kin;
I have tried to write a haiku
for the willow which strokes my son.

Don’t disturb my son
when the raven plays in the shape of his spectre –
I have tried to shoo it away and it quarrels with my broomstick;
I have tried to tell my son that he was ten yards from living.

I have tried to feed a Nagasaki starling
when it drank the black rain;
I have tried to get it to sing so this wraith could be comforted –
don’t disturb my grave and desecrate me