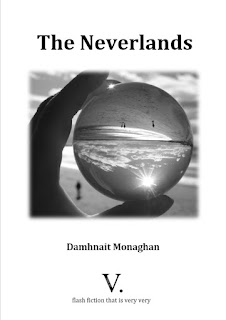 V. Press is very very pleased to announce the launch of Damhnait Monaghan's The Neverlands!

“The Neverlands, a virtuoso mosaic of microfictions by Damhnait Monaghan, tells the story of Nuala, a child caught in the crossfire of her parents' troubled marriage. This is a family epic in flash form, masterfully and movingly distilled, both devastating and hopeful. A gorgeous debut.” Kathy Fish

“The Neverlands is a heart-tugger of a collection. In pitch-perfect colloquial prose, Damhnait Monaghan waltzes us through the sorrows of a poverty-stricken Irish family, who struggle to love each other well. Funny, clever, warm and sad, this is a beautiful book.” Nuala O’Connor

The interconnected stories in The Neverlands are very raw and very real.

A sample flash can be read below.

BUY The Neverlands NOW using the paypal buttons below.

Da staggers up to the school gates at morning break and calls for Nuala. Her stomach is bubbling but she goes over and looks at him through the fence. He smiles and there’s more teeth gone. When he says he’s proud of his Nuala, she pinches her wrist hard so she doesn’t cry. Why does he have to be drunk to say anything good? Sister Angelique comes to lead her away and says it’s Dutch courage. Nuala says she doesn’t know much about Holland and Sister Angelique says actually it’s the Neverlands. And Nuala thinks that sounds about right.

Publishing with an Indie Press

Diane Simmons, whose debut flash fiction collection Finding A Way was  published by Ad Hoc Fiction in  February 2019, and Damhnait Monaghan, whose debut flash fiction chapbook, The Neverlands was published in April 2019 by V.Press, will talk about their journeys to publication and what has happened in the few months since, with publishers Jude Higgins from Ad Hoc Fiction and Sarah Leavesley from V Press. Diane and Damhnait will read samples from their collections and there will be  Q and A.