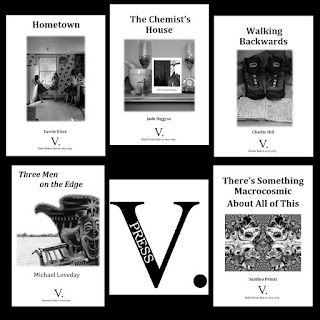 The piece was originally written for a blogpost for the National Flash Fiction Festival, which takes place at Trinity College, Bristol from July 20-22 and will feature a V. Press showcase.

The showcase on Sunday, July 22, will feature readings from this year's V. Press titles: There's Something Macrocosmic About All of This by Santino Prinzi and Michael Loveday's flash fiction novella Three Men on the Edge.

A FLASH GUIDE TO V. PRESS

In summer 2018, V. Press celebrates its fifth birthday. It’s a very, very delightful coincidence that it also marks the publication of our fifth fiction title!

The press was originally set up and launched at Ledbury Poetry Festival in 2013. But it only really got going in 2015, with three poetry pamphlets. In 2016, V. Press published three poetry pamphlets, a poetry collection and our first flash pamphlet. This increased to nine titles in 2017, with a similar schedule for 2018.

The move into publishing flash fiction alongside poetry was an organic one. I’d long admired Carrie Etter’s poetry and I was delighted to be able to publish her fiction pamphlet, Hometown. Our range has built up from there, with clear black and white photographic cover designs to make our fiction immediately and distinctively discernible from our poetry titles.

The compressed nature of flash sits well alongside poetry, but I also like work that mixes artforms or threads across genre boundaries. I have eclectic tastes in my own reading and writing; I think this is reflected in my choices as an editor and publisher.

One thing I look for in manuscripts is not just great individual pieces but some overall cohesion. The pamphlet in particular is perfect for sequences of poems and short fiction which combine to create a sum that’s greater than its parts.

This year, Michael Loveday’s Three Men on the Edge is a very richly shaded and very unconventional novella-in-flash. This heart-felt narrative of three men living on the edge of London is also funny, scary and beautifully crafted, with poetic language and emotional precision. Meanwhile, the very human and very heart-provoking flashes in Santino Prinzi’s There's Something Macrocosmic About All of This range across hilarious, playful, profound and fierce as they pick out the big truths in everyday moments.

Ultimately, the choice of titles is subjective – and not just about the individual manuscript, but also how it fits with V. Press’s overall range. I’m pleased this includes work from open submissions windows. It’s really exciting to discover new work by new writers as well as established names!

We had a poetry submissions window open in April/May 2018, which will now be followed by a flash fiction submission window in July. But I’m also exploring the possibility of guest editors – to potentially increase the diversity and maybe even number of titles that we publish, as well as potentially allowing writer-editors based overseas to influence the work that V. Press produces.

Although we’re not yet five years old, it’s been great to see the press shortlisted in the Michael Marks Publishers’ Award 2017, as well as many of our authors picking up their own wonderful individual reviews, awards and accolades.

More information and sample flashes/poems can be found on our website and please do follow us on twitter at @vpresspoetry. I’m also very very much looking forward to meeting writers and readers at this year’s Flash Fiction Festival!!!