The Aesthetics of Breath 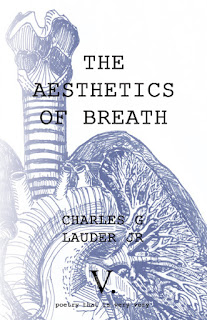 BUY The Aesthetics of Breath NOW using the paypal buttons (with delivery options) below.

Listen to and watch the poet reading his The Aesthetics of Breath poem, 'Sir Walter Raleigh of Bexar County, Texas', below:

"[...]In the fascinating long poem "Incarnations", imagery and language are pitch-perfect, chronicling the story of a couple. The separate strands of their lives weave together, forming something new, but there is divergence as well as rapprochement, a sense that individuals never wholly become part of each other, but strive toward "different peaks with different views". [...] "Incarnations" strikes me as a terrific poem, turning personal experience into something universal in the way that poems should do, but so often don't."

"[..]the careful building of these poems into a logical order, the vivid depiction of transient lives, the insight into social and historical events, was competent and challenging. The strength and beauty of some poems more than made up for lapses into the esoteric and, as reader, I felt gifted with the surprising perspective of man and father."

"History blends with family in this engaging and impressive debut collection by Charles G. Lauder. [...]

"In some ways this manifold debut— taking in, as it does, historical figures, family lives, the problem of evil, and how an element of fantasy and danger is never far from our perception of those we treasure and love— might strain at the edges and become less a sum of its parts, and more of, well, a collection. What draws it together is the consistent awareness of a sense of self. ‘Between lives no light defines us / no mirror reassures us’ as Lauder presents it in ‘Incarnations’: how we are different people in different contexts and how we remain enigmatic and unknowable even to those closet to us. This necessary blurring of character is, ultimately, what charges the writing, exploring the simple, everyday doublings wherein lie ordinary hypocrisies, dreams and nightmares, as well as betrayal and infamy. The lies we tell, the love we offer, and the poetry we read: all are the aesthetics of breath."