Something so wild and new in this feeling 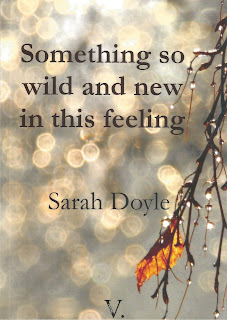 “In these inventive and adventurous collage poems, Sarah Doyle presents Dorothy Wordsworth’s exuberant feeling for life and language in a fresh fabric of her own making. Sympathetic and insightful, tactful, and imaginative, Doyle’s compositions refract the energies of Dorothy’s writings through the subtle medium of her own sensibility, and the result is at once daring and illuminating.”
Gregory Leadbetter
“In Something so wild and new in this feeling, Sarah Doyle has taken Dorothy Wordsworth’s journals and developed excerpts into poems, finding felicities of phrasing, musicality, and ideas. Doyle’s skills in pacing, use of the line, and the possibilities of form help us appreciate anew Wordsworth’s habits of thought and close attention to the natural world. With Wordsworth and Doyle, the reader hears the birds singing in the mist.”
Carrie Etter
Something so wild and new in this feeling is very composite and very metamorphic.
Special Mention in the 2021 Saboteur Award for Best Poetry Pamphlet
ISBN: 978-1-8380488-1-5
36 pages, perfect bound
R.R.P. £6.50
A sample poem from the pamphlet can be found below.
BUY Something so wild and new in this feeling NOW using the Paypal options below.
N.B. Any international customs/duty charges are the buyer's responsibility.
All the Heavens
Venus first showing herself between the struggling
clouds; afterwards Jupiter appeared. The crescent
moon, Jupiter, and Venus. Jupiter was very glorious,
and one large star hung over the corner of the hills.
Many stars were out. The clouds were moveless,
and the sky soft purple, the lake of Rydale calm,
Jupiter behind. Jupiter at least we call him –
we always call the largest star Jupiter.
The moon was a good height above the mountains.
She seemed far distant in the sky. There were two
stars beside her, that twinkled in and out, and seemed
almost like butterflies in motion and lightness.
Three solitary stars in the middle of the blue vault,
one or two on the points of the high hills. I had
time to look at the moon while I was thinking my
own thoughts. The moon travelled through the clouds.
The evening star and the glory of the sky: the reflections
in the water were more beautiful than the sky itself,
brighter than precious stones, for ever melting away.
The evening star sunk down, colours faded away.
Jupiter over the hilltops, the only star, like a sun,
flashed out at intervals from behind a black cloud.
The moon appearing now half veiled, the stars
sometimes hiding themselves behind greying clouds.
A very bright moonlight night. Venus almost like
another moon, lost to us long before she goes
down the large white sea. The horned moon was set.
A beautiful evening, very starry, the horned moon.
The moon shone like herrings in the water, a silver
boat. The moon had the old moon in her arms
in a black-blue vault. She sailed along, followed
by multitudes of stars, small, and bright, and sharp.
A very mild moonlight night. Glow-worms everywhere.
Attended by Jupiter and Venus in their palest hues,
the crescent moon, a silvery line, a thready bow.
The moonlight lay upon the hills like snow.
REVIEWS
"Sarah Doyle has mined the prose of Dorothy’s journals to create twenty two collage poems, skilfully re-presenting selected extracts from the journals in a wide range of forms."
Annie Fisher, OPOI, Sphinx, full review here.
"The title poem of Sarah Doyle’s audacious and brilliantly conceived new collection says it all. Reading these collage poems, drawn from Dorothy Wordsworth’s journals, there’s something absolutely remarkable about seeing her luminous words for the first time presented as poetry.
"Using cut-up techniques, elements of found poetry, and applying her own sensibilities as an unusually accomplished poet herself, Sarah has given us these words afresh. [...] Sarah has crafted individual pieces that catch the light in new and unexpected ways."
Christopher James, full review here.
“Carrie Etter nails it when she mentions Sarah Doyle’s ‘felicities of phrasing, musicality and ideas.’ Collaging other writings can feel haphazard and awkward or too forced but this is never the case in this pamphlet which feels like both a collaboration and translation. […] Sarah Doyle’s re-imaginings are astoundingly successful and I thoroughly recommend this pamphlet.”
Pam Thompson, London Grip, full review here.
"Drawn from the diaries of Dorothy Wordsworth [...] The contemporary poet brings these selected snippets together with all the care and consideration of a professional florist – or expert in Ikebana – resulting in marvellously original pieces that are a sheer joy to read. The poem about walking, which also manages to rhyme, the rhythm of the lines strolling along as you journey through it and alongside the I of the poem, was a particular favourite."
Mab Jones, buzz, full review here.
"[...]“Something so wild and new in this feeling”" takes Wordsworth’s words shared in private in her journal and brings them to life. [...] Doyle has done a successful job in selecting the phrases that demonstrate Wordsworth’s poetic sensibilities and crafting them into poems that work like a seam of light silvering the birches."
Emma Lee, full review here.