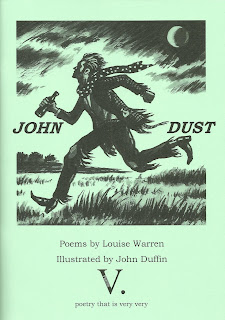 “Louise Warren uses grief as an artist uses a sharpened pencil to delicately illustrate that what we leave, we inevitably return to whether through memories or myth.  Nature and Death are dancing partners in this beautifully moving collection of poems which explore the idea of roots in family and place. An earthy reverence combined with the keenest observation brings Somerset alive from the ashes of the past. Here, we find apples, owls, folklore, riddles, hedgerows, all linked by the character of John Dust, who is so much more than mere mortality: “I will be your Silhouette, your Diplomat, your Compass” (‘Swifts’). Indeed, the footnote lets us know that these are all caravans. We are in sympathetic imaginative territory to Jacob Polley’s award-winning Jackself where the reader is engaged and often lulled, only to be taken by surprise. It could be argued this how the process of bereavement works – you think you have arrived at a certain point, only to be off-balanced, but the sense of re-discovery of something lost in these poems, is a joyous reclamation. Many of the poems have found recognition in poetry competitions, but this is more than a collection of standout poems; it is the whole that makes it remarkable. The pamphlet is also illustrated with fine drawings by the artist, John Duffin, which match Warren’s words with their deft yet delicate strokes and serve to highlight the wistful strength of this collection.” Lisa Kelly

“Riddles and rhythms weave the wonderful spell of John Dust – Louise Warren's original Somerset legend is a brilliant feat of imagination, and will leave you wanting more stories of this mythical man and his exquisitely off-kilter world.” Kate Garrett

Like a character from a contemporary Somerset folktale,  John Dust is very atmospheric and very bewitching.

A John Dust sample poem  by Louise Warren and illustration by John Duffin can be found below. 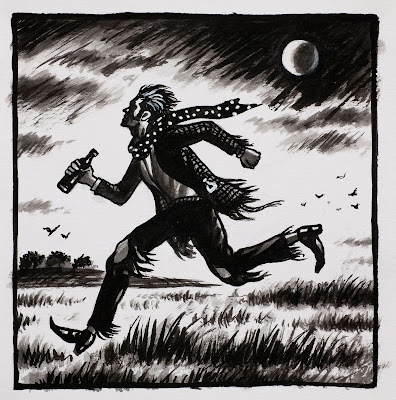 In the barn, my sofa stands in its puff of white breath,
heavy, patient, packed in tight with the herd,
waiting. I wait for it.

Downstairs, the afternoon moves heavily around the house,
a washing line turns slowly on its stalk,
the carpet in the hallway runs a sluggish ditch.

Back then, before they built on it, back then
the path stumped short into nettles, just fields,
arm of the sky bent round, empty.

Empty as pockets, empty as churches,
empty as milk pails rusting on gateposts.
I look out the windows milky with flat screens,

empty as ditches,
cold in the kitchen, biting like nettles,
sheeny as hoar frost.

Deep inside the bathroom I undress myself for you,
John Dust.
Down to the sedge and water, down to the beak of me,

sharp in the reed bed, down to the hidden.
I strip the light from my skin until I am overcast,
become cloud cover.

John Dust.
My man under the motorway,
flat out in the dark fields, seeding the hedges,

scratching your chest hair, wispy as larches,
pinking like evening, stitchwort and abattoir, bloody as Sedgemoor,
lipped up with cider, scraggy as winter.

You fetch each room, one by one, back to the marshes.
Plant forks and teaspoons, chairs for the heron’s nest,
propped up and broken,

the sky rusting over, smashed up with egg yolks,
water as mirror, water as leather, water as smoke, as trick,
a light under the door.

I stand in the empty
waiting for nothing.
Birds in the buckthorn, a house full of berries.

"In this lovely pamphlet — beautifully illustrated too with prints that complement the poems well — the poet, Louise Warren, creates a vivid world where indoors and outdoors bleed into each other, and this mythic figure John Dust gallops about his business. [...]
"The result is a rich, stitched mesh of a world captured on — or more precisely in — its own terms. ‘Come up by coach, by train, come up by Jack the Treacle Eater’, she invites in ‘Town’; sure enough, her language winds me in."

“There are no weak poems and the intense atmosphere is maintained throughout. […]
“Such care has gone into the writing of each line, the choice of wording and metaphor, and this is typical of the whole pamphlet. […]
“Even a seemingly trivial subject can take on magnitude when seen through Warren’s keenly observant eye and original viewpoint. In ‘Fly’ she is writing in the tradition of poets like D.H. Lawrence, who excelled in poetry about creatures from mosquitoes to elephants:

How beautiful he is in death
laid out in the white afterlife
like a god, a fly on the sill
in a tapestry of cup rings.

I have picked out these poems as examples of the striking nature and observational poems which go along with the ones on the theme of legend which hold the collection together. […]

“John Dust is illustrated by the award-winning painter and print-maker John Duffin, adding to the folktale feel of the pamphlet and letting us see Warren’s legendary figure.”

"[...] The title character is a malleable ghost-like person others can project their feelings on. Just when someone thinks they have the measure of him, he shifts and surprises. He represents traditional folklore but can be found in Poundland. [...]"

"[..]so authentic and richly imagined is the character of John Dust that I had assumed he really was part of folklore, a figure stalking the South-West for generations. In fact the character is Louise Warren’s own invention and it is the realisation of this character that gives the pamphlet licence to dazzle, with inventive imagery and new rung language running through the poems. [...]

"Warren’s imagery is lively and surprising, her rhythms inventive, with a sure use of repetition. Sometimes the pamphlet reads like a song; sometimes like a botanist’s memoir. Often, it’s playful – even tongue-in-cheek. Always relishing the vibrancy of words."