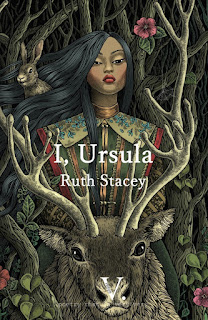 “Ruth Stacey's new collection revels in the frank and often stark geographies of mental health and the playful and often political complexities of the muse. By creating a sweeping panorama of the blindingly-bright – and occasionally dangerous – contexts in which the muse inspires, cajoles, and deceives, I, Ursula animates the raw truths of emotional fragility and various forms of haunting through a staggering range of voices and ghostly imaginings. This inventive tour of connection and disconnection, observing and being observed, leaves the reader contemplating power dynamics in both relationships and the creation (and consumption) of art in chilling new ways.” Carolyn Jess-Cooke

“Stricken and painfully well-observed, Ruth Stacey’s new collection is replete with our magical excuses, boundless infatuations, loyalties and sanctuaries. Her work is particularly poignant on the porousness between our inner and outer lives. To enter the poems is to feel another consciousness pressing against your own through a boundary that seems, for a moment, not to exist.” Luke Kennard

I, Ursula is very haunting and very enigmatic.
Longlisted in the Poetry Book Awards 2020!!!

A sample poem from I, Ursula can be enjoyed below.

BUY I, Ursula NOW using the paypal buttons (with delivery options) below.

If you don't want
poems written about
you, then

do not make me fall in love with you
by seducing me softly until the honey
suckles.

You should flee female poets; their call
will transform you into a buck
leaping to escape the word dogs.

This is solid advice; it is true.
Beware, your brown eyes will turn bitter –
I am not just this season, not your bit of fun

because I will write poems that will petrify
your royal jelly into wax; I will
describe the growl that you make as you come.

"Disproportionately overlooked are non-metropolitan poets such as Ruth Stacey, whose second collection, the mysterious and fabular I, Ursula (V. Press £10.99) appears from an award-winning West Midlands micropublisher. The book conjures a Dantesque lost forest [...]"


"[...]Stacey is a master of deceptive language that haunts you by its lullaby and paradigm style. Before you know it, you are seduced and involved into the play of words and metaphors.[...]

"A sumptuous piece of work from a writer that is going from strength to strength."

"[...] Overall “I, Ursula” is a chilling, memorable exploration of the darker side of the muse. She is stalked, hunted, desired and formed in other’s image, a body on which to project desires. Rarely does she get her own voice but here she contemplates the power dynamics in relationships and how she is used to create art, often to her own detriment. Despite the projection of delicacy and fragility, she has to remain strong with a will to survive. Ruth Stacey has created a powerful collection."

"The poems which I find the most powerful are those where the poet explores the experience of the female muse and the male artist in both art and literature. [...] These poems – like so many others in the collection – explore relationships between artist and muse, men and women, the tensions between life and art, and the creation and appreciation of various forms of art, in terms of power and powerlessness."
Jane Simmons, Everybody's Reviewing, full review here.


"There is so much to enjoy in these poems. The imagery Ruth uses is inventive and expressive – children’s fists are “clams”, lace is “a little noose”. Line breaks maintain tension and often create a wry humour."

Andrea Mbarushimana, Here Comes Everyone, full review here
“The artist’s muse is at the forefront of Ruth Stacey’s second collection, I, Ursula,
though colour and texture are equally important to recreate the sumptuous and
often sinister settings of the poems: […]
“The most successful poems are where the metaphoric plumbline from now, through
layers of story and myth, is strongly defined; excavations of sexual and gender
dynamics: […]”

Pam Thompson, Under the Radar 26, magazine can be ordered here