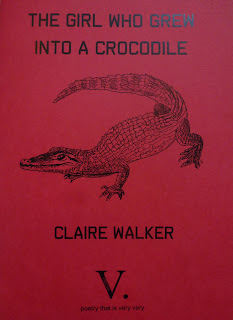 The Girl Who Grew Into a Crocodile is Claire Walker's first pamphlet, published by V. Press in October 2015.

Daughter, wife and mother; femme fatale, object of study and maker of myths…The Girl Who Grew Into a Crocodile explores what being a real woman has been, is, and could be in today’s society of celebrity, stereotypes and media spin. Beneath the poems’ sometimes quiet surfaces, a strong voice, pared word choices, precise images and thought-provoking metaphor make this a powerful pamphlet. The Girl Who Grew Into a Crocodile is very vivid and very resonant.

"Claire Walker's debut pamphlet The Girl Who Grew Into a Crocodile is a riveting meditation on motherhood and transformation that crackles with drama. There are moments of lyrical delicacy and oceanic longings, and Walker's perceptual acuity pitches the reader into a world where nothing is taken at face value – a girl might be a crocodile, a mermaid could become captor, and seeds are studied for their mnemonic potential. This is a work to be savoured." Carolyn Jess Cooke

"A confident and impressive debut by Claire Walker. The alluring qualities in this collection are the sense of mystique in many of her poems which at first glance appear elucidating. The stylistic fusion of narrative and illustrative poetry see-saws from the adult experience of life to a fabling account of the innocence and fragility of childhood and adolescence. Claire Walker is a writer who clearly cares about her craft and some of the dreamlike qualities of this collection are reminiscent of Joy Davidman’s work." Antony Owen

"These are poems of growth, fertility and flow – rivers, plants, women. Claire Walker skilfully combines nature, myth and the everyday, and when reading her work, it’s difficult to imagine a world where things are ever any other way. The Girl Who Grew Into a Crocodile is a stunning, quietly powerful debut pamphlet, full of wistful smiles and blissful tears." Kate Garrett

"Claire Walker’s début pamphlet, The Girl Who Grew Into A Crocodile, is full of bitter rot, mythic experiences and beautiful, reverberating truth...These poems are powerful, incisive; raw without being clumsy. It was a pleasure to read them." Bethany W. Pope, Sabotage Reviews (The full review here.)

The Girl Who Grew Into a Crocodile was chosen for the Poetry Book Society Spring Bulletin 2016 ‘Other New Pamphlets’.

"In her review on the pamphlet's back, Carolyn Jess Cooke speaks of how 'nothing is taken at face value.' I, too, discovered this, and liked how it was often images from the natural world that, fairy tale like, transformed human beings into something other... The poems themselves pulled me in, and left me wanting to read more of Walker's work." From a review by Deborah Tyler-Bennett, Under the Radar, issue 17.

A sample poem from the pamphlet can be read below.

When she was young, they'd swim. Take off
sandals and frilled ankle socks and jump
into the river. She loved to feel the water pull
ribboned hair to float behind her.

The games started with smiles: splashing; testing
who could hold a breath longest. They never matched her.
She was born to lie in wait, to feel the kiss
of the current in her ears until her head turned light.

But children wish to win. The others turned
as green as the rushes lining their pool. They plotted, held her
down too long. The water swilled round her lungs and she coughed
her heartsong out with it.

That night, she lay awake under a sky that was turning
tides with its dust covered ball. She pulled the cold rock
down, seethed until scales replaced skin, found the biting point
of a new jaw and wished for the crunch of bone.

Next time, she waited in the shallows, camouflaged
in the rushes, cold blood immersed. Eyes broke
the surface, webbed feet treading water. The sun hit
her back and she felt her armour shine.

Then she made her move. Opened up