Tell Mistakes I Love Them 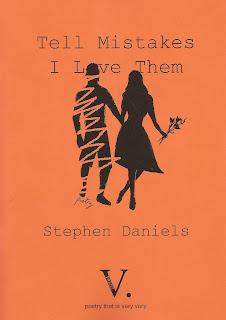 BUY a copy now using the paypal link below.


"Stephen's carefully conveyed sense of the surreal qualities of the everyday allows him to address the big themes from surprising angles, for instance in one poem where intimations of mortality lurk in the background as he describes getting a mole checked by his doctor. He's one of those poets who writes poems about things that other poets wouldn't write poems about, which is only ever a good thing."

"...It’s a wonderful way to conclude a very accomplished debut:

'for however long it lasted
I believe we were flying'

In a field of increasingly homogenised writing, Stephen Daniels’ book stands out, earmarking him as a distinct, honest and self-deprecating voice."


"Daniels weaves a surreal narrative from childhood through to different deaths, finalising the entire sequence with a wonderfully touching last line that somehow seems to encapsulate many of the themes raised throughout the book:

'for however long it lasted / I believe we were flying' (uplift)

...The truth is that the entire release is liberally scattered with lines that live beyond the page, bringing an extra force to Daniels' accounts of childhood incidents and adult realisations.

...Tell Mistakes I Love Them is unexpectedly touching, stylistically interesting, and a promising beginning for Stephen Daniels - and it's certainly a worthy addition to any poetry-reader's pamphlet pile."

Our punishment, a ringmaster ear-clip
and a bedroom full of sad clown faces.