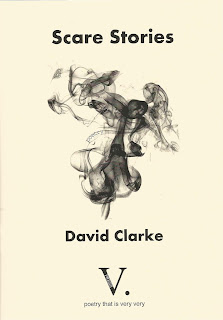 “The poems in Scare Stories offer us exactly that: a series of richly populated narratives that show the contemporary moment as a grotesque and fearful nightmare. This is a world of war and refugees, high politics and helicopters, sex and suffering as entertainment. Somewhere at the root of things is money. It’s all delivered in sharp quatrains whose flamboyant rhyming makes it more brutal, not less. It’s a vision, in the Hieronymus Bosch sense, funny and horrifying, but it’s redeemed at last by our futile wishing for redemption. Scare Stories would have had Gottfried Benn cheering wildly, and if that's not a troubling idea I don't know what is.” Tony Williams

“David Clarke conjures up post-apocalyptic visions that are uncomfortably close to our present. All of humanity is played out here, from gamers to generals, the whole bitingly observed. Scare Stories is a frightening mirror, but it’s also compelling and hypnotic, I dare you to look away.” Claire Trévien

Scare Stories is a sequence of poems that is very unusual and very unsettling.

David Clarke's sequence-length pamphlet Scare Stories is published by V. Press in March 2017. Clarke's pamphlet, Gaud (Flarestack), won the Michael Marks Award in 2013. His first full collection of poetry, Arc, was published by Nine Arches Press in 2016 and was longlisted for the Polari First Book Prize.

A sample from the pamphlet can be found below.

"...his sustained use of form is also quite admirable. With controlled nerve, Clarke offers a sequence of quick, dark bites, with glinting teeth."


Scare Stories by David Clarke is named a The Poetry School Book of the Year 2017.

"Clarke’s eerie sequence of vignettes can be read in any order, juxtaposed and rearranged like Tarot cards to reveal further details and dangers, without ever giving away the bigger picture; if such convenient knowledge were even possible (there will be no newspapers announcing the last day on earth)..."

"Causality and chaos. These could be our governing gods at present. They are certainly the governing gods in David Clarke’s Scare Stories – a 25 poem sequence in the third person plural set in ‘possible near futures or versions of the present’.
[…]
"What impressed me most about this collection were its delivery mechanisms. Not necessarily ‘what’ is said in the poems, but ‘how’ Clarke chooses to construct and present them. It’s a masterclass in how to embed more questions into the work. Fitting for the highly questionable circumstances we’re currently living in." Heidi Williamson, reviewing for The Poetry School. Her full detailed and thoughtful review can be found here.

"Each page an untitled poem, snatch of eavesdropping, a rapidfire confession, the reader has to guess at the identity of the speakers and whereabouts and what of which they speak. Told throughout in first person plural, narrators could be terrorists, boat crews, refugees, security guards, viewers, readers, lookers-on, scientists, gameboys, cult members, audience, patients, snipers... The scare here being the world and time we inhabit and which is seeking to destroy us. So taken with what was being said I didn't notice until I was 20 pages in how it was being said. Then I realised that each piece was following the same form  – 3 stanzas of 4 lines apiece, with each stanza having an ABBA rhyme scheme. Usually I find the clunk of end-rhymes an impediment to my engagement with a poem. So my not having noticed please take as high praise. Indeed there is far more to be gained from this collection than I have allowed myself space here to tell." Sam Smith, The Journal

In Tears in the Fence:

“David Clarke’s Scare Stories (V Press), written from a soldier’s perspective in enclosed rhyme, employing a taut sonic register, impresses with its post-apocalyptic vision of war being made as a film for pleasure. It is a conceit that works as the notion of the viewer and participant are conflated through the use of the first person plural throughout. The natural rhymes and pithy language produce a sense of an emerging pattern for a possible near future.” David Caddy, Tears in the Fence, 67, Spring 2018

We buzz our personal shopper in –
her face glitched on a tiny screen.
In this, the cocktail hour, we sheen
our gums with bitters and sapphire gin,

recline as the video wall dilates
with shots of ocean swell, segues
into copper sundowns. Displayed
across the coffee table, the latest

linens, white, but piped with clay
or teal, moccasins in ivory
suede. Our personal shopper’s very
much on the money. We wave her away.