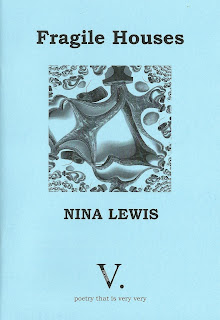 
Home is more than a brick building, family trees or ancestral bones. In Fragile Houses, Nina Lewis explores the people, places and memories carried through life. Vibrant imagery and precise insight reveal strength in the most tender places. The pamphlet includes a photographic sequence from S.A. Leavesley that is directly inspired by the poems’ vivid mix of fragility and sharpness. Fragile Houses is very authentic and very fervent.

“In this engaging debut pamphlet, Nina Lewis deftly examines the human condition through the lens of family relationships. There is more than memoir here; issues of connection and disconnection, presence and absence, are gently explored while always acknowledging ‘These years can’t be backtracked or re-spent’ (from ‘Fusion’).” Angela France

“Nina Lewis’ debut pamphlet from V. Press explores memory and family. These are exact, concisely-conceived poems which find their power in restraint and understatement – ‘In our family, minds go missing’. She writes observantly about memory, and its trickeries, caught ‘somewhere in the space/ between those two lost letters, / as vivid as gold-dust,/ falling to the earth.’ Throughout the pamphlet Lewis maintains a voice which is sometimes sad, but truthful and grown wise, with some really memorable images which successfully convey the strong emotions she deals in – ‘He stayed away. Radio silence. / An opaque circle was drawn around our house/ filled with white noise.’” Jean Atkin

A sample poem may be found below, along with a sample image from the pamphlet's  photographic sequence by S. A. Leavesley.

Teaching us ‘antonyms’, she asked:
‘What is the opposite of sweet?’
I remember stretching my arm up so high
I had to balance it against my left hand
to stop the aching.

I stared right at her.
I knew this; I knew it.

I was picked third;
‘Chocolate!’ I announced proudly,
being sure of applause.

She didn’t smile.
Looked at me as if she was trying
to work something out.
Some children sniggered;
she reprimanded them.
This made me think I was right after all.

She asked why I thought it was chocolate
and I explained how, with weekly pocket money,
Dad would take us up to the post office
and we could either afford sweets
or chocolate,
but not both.

I didn’t really know ‘sour’,
but the look she gave
demonstrated it perfectly.

"In this slim pamphlet, Lewis investigates all aspects of memory, its deficiencies and its glories. The tremendous warmth and descriptive power of the poet gathers us up and makes us complicit, allowing an exploration of joy, loss and sadness, without ever being overbearing. The writing is clear, precise and evocative, not given to exuberant flourishes. The poet has a beautiful intuition for the controlled breath down to the final beat of each poem, and she uses this tension to deliver some of her most poignant thoughts...


"Lewis is adept at using capitalisation to full advantage. I’ve seldom seen it used so expressly as a device. There are delightful repetitions and the occasional game with pronouns...Fragile Houses is a deft and thought-provoking debut."

“Opens with anecdotal poems of childhood and family members, moves on to objects and absences. Every childhood owns similarities, none the same. As the differences grow so do the poems in Fragile Houses become more interesting – the single-parent mother lauded, absent father defended: “He didn’t wait for old age to be eccentric.’ A Mother’s Heart to Heart. She even takes us to when the backwards genealogy of self is no longer predominant, self subsumed into the expanding and disparate life to come.” Sam Smith, The Journal